We are the McCune Osage Township Library located in McCune, Crawford County, Kansas.

The mission of the McCune Osage Township Library is to provide quality library resources and services for the residents of the community, necessary to fulfill knowledge, education, research, recreation, and informational needs in a way that promotes the quality of life. 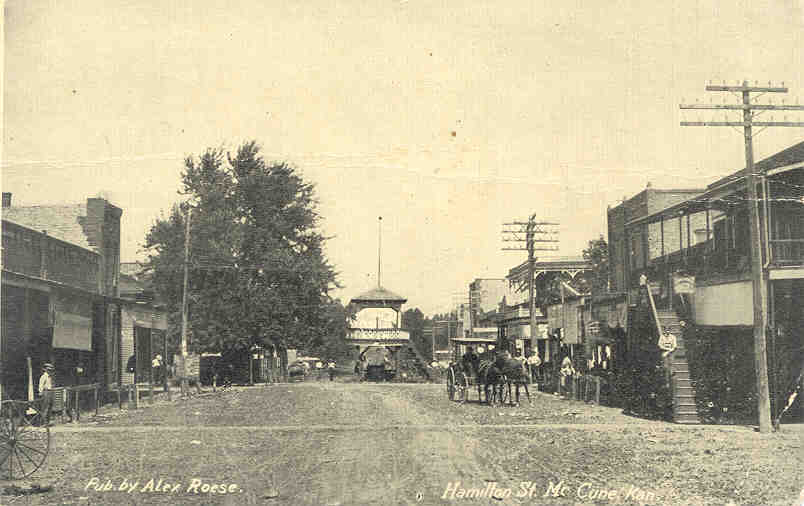 Hamilton Street or Main Street now, as it appeared in 1908 (looking North)

The McCune City Library began operation in 1968 in the Scout House as a project of the McCune Improvement Club. On April 18, 1973, the library moved to a larger building at 516 Main Street, next to the old City Hall. Outgrowing the space again in 1984, the library moved to the current address at 509 6th Street. In June 2001, the first East Addition was added for a new combination children’s section and meeting room.

In 2006, the library changed from a city to a township library and became the McCune Osage Township Library. The library has grown in size and in its capabilities through the years. We now offer a large selection of reading materials, SEKnFind checkout, rotation books, free computer usage, free Wi-Fi, free video & audio checkouts, a children’s section, a public meeting room, as well as a large history/genealogy department and museum.

The original McCune History Department section of the library was made possible by the Francis & Maxine (Quenoy) Wilson Memorials in January 2007. The memorials enabled the then newly opened history department to purchase items necessary to collect and store our local history in a corner of the library facility.

A Vanguard Education Fund grant provided by Herman & Ailene Parsons was presented to the McCune History Department in January 2009, and a South Building Addition was added to the library, doubling the size of the library.

The Pritchett Trust Fund grant, administered by M & I Wealth of Pittsburg and many private donations were also received in 2009 and enabled us to go forward with the interior portion of this project. This new addition houses the history/genealogy department and museum.

In 2012, the library received a grant from the Community Foundation of SEK and other donations were received from caring people in the community and great folks who remember their roots, to enable us to further increase the size and usability of the facility for the benefit of the community and tourists. The additional space allowed for a new children’s section and a new adult library section. A public meeting room was added with a kitchenette and the new addition was named the Frank D. Dunnick Hall.

Also in 2012, generous grants and funding were received from the Pritchett Trust Fund, Herman & Ailene Parsons Vanguard Education Trust Fund, Steve & Becky Cooper, Frank D. Dunnick, and the McCune Lions Club. These funds made possible the new shelving in the new Adult and Children’s Sections of the library. The Pritchett Trust Fund was also very instrumental in providing funding for kitchen appliances, cabinets, an area rug, tables and chairs for the new facility.

All of this opened up an area in the original library building for expansion of the museum area, which was greatly needed. The preparation for the second addition to the History Department & Museum, made possible in April 2015 by the memorial funds of Frank D. Dunnick and Neva (Grandle) Johnston gave the Roy Rogers & Dale Evans collection, left to the museum by Frank D. Dunnick a permanent home. This room also houses the McCune Rural High School class pictures, trophies, and other memorabilia. The McCune Alumni Association, Inc. made the display cases for the school trophies possible.

We are grateful to be able to serve our community. We are still moving forward!

To contact the Osage Township or to mail items, please send them to: